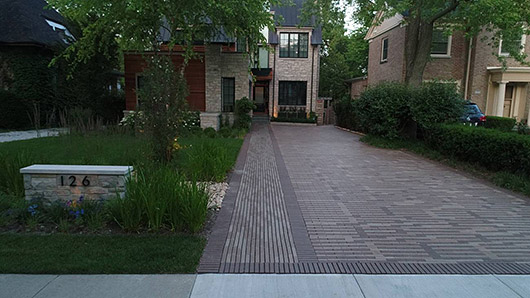 Gina says she got ideas for the paver pattern by doing her research, looking at manufacturers’ websites and adapting variations on different elements she thought might work for this project. Then she presented a number of options (materials, samples and images) to the client. “We chose Boardwalk pavers to repeat the narrow linear character of the home’s new siding and roofing materials, and neutral brown tones to complement the natural stone and wood detail on the house.”

To visually separate the front walk area from the driveway parking area, Gina changed the direction of the pavers, added a border and made a slight change in the paver color mix.

The bump out in the drive on the right side preserves the roots of a large oak tree on the property line. The path of the bump out is the same as it was with the old driveway. “Since the tree had already been existing with the driveway over its roots in that zone, we decided that it wouldn't cause it any further harm to keep it there.”
Dramatic drive solves drainage
By Tom Hatlen

It’s hard to look at a beautiful project like this and consider that effective drainage was perhaps its major achievement. This permeable driveway serves as a 1,700 cubic foot detention zone for stormwater pumped 250’ from a far corner of the backyard that used to be a large recurring puddle.


Year completed
2017
The far corner of the backyard is a low point for the surrounding properties. The area was constantly flooded with standing water so the homeowners hired an engineering firm to solve the problem.

The solution was to install a river rock drainage area the width of the property (about 50’) and put in a pump at the low point. From there, a pipe carries stormwater the length of the property around the side of the house beneath the driveway and empties near the middle of the front yard.

While this solved the backyard flooding issue, it created a mess in the front. “A massive amount of water was being pumped into their front yard. It was basically a big pit of mud,” explains Gina Giannetti of O'Brien Landscape.

Gina learned of the backyard drainage project when it was already underway while she and the homeowners were discussing the driveway and front lawn renovation. Those renovations were in the master plan Gina developed with the client a few years back. The front yard drain pipe flood was a big new wrinkle.

For front yard drainage solutions, Gina says they didn’t give much thought to turning the lawn into a rain garden. It wouldn’t have been able to handle the volume of water. And, there weren’t any good options for moving the drain pipe. It couldn’t be moved closer to the road/storm sewer or closer than 10’ from the property line. 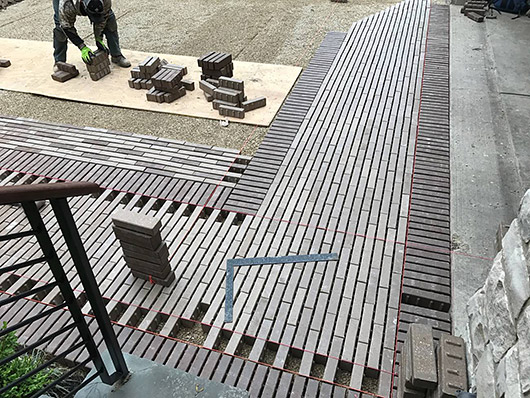 Installing the pattern starts with determining the percentage needed for each color and ordering that amount. Gina says there’s a lot of advance communication with the crew. “We go over photos and communicate the goal for the pattern. We talk about percentages. We look at the materials.”

On site, the crew does an initial trial run laying pavers in the pattern. “I check it, make comments, and we decide, together, what we think looks the best. We made sure the client would be there to confirm it was looking how she expected. You want to make those adjustments as early in the process as possible.”

Maintaining the consistently random pattern throughout the installation relies on the crew’s constant attention to detail as they go.
A permeable solution
Since they were redoing the driveway anyway, why not go permeable. The drainage pipe was just 5’ from the drive. So, they dug a dry-well, a 3’ pit filled with river rock to handle high volume flow from the pipe. The dry-well connects to the 12” drainage rock driveway base and dissipates throughout the entire paver base installation. It’s like having a detention pond beneath the pavement.

Gina says the base is graded so that if the driveway base ever became completely full of water, it would overflow at the apron to the street.

So, drainage problem solved? Gina says, “There was a huge rainstorm about a week after we finished. The homeowners sat in their car, rolled down the window, and took a video of the rain pouring down, and the driveway was dry within a really short amount of time. There was no standing water anywhere.”

Since then, Gina’s also gone back to check the driveway several times following rains. No problems. 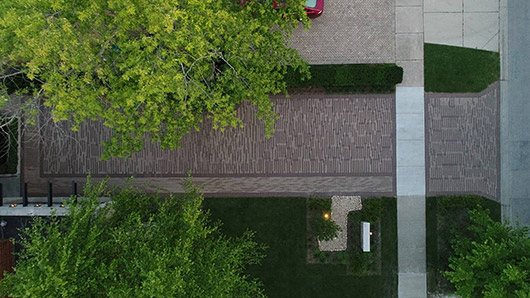 The drainage pipe from the backyard discharges into river rock to the side of the drive near the sidewalk. Stormwater then dissipates into the drainage rock base of the permeable paver installation where it seeps into the ground.

The sidewalk across the drive was replaced and drainage rock installed beneath it so water flows from the drive to the apron. 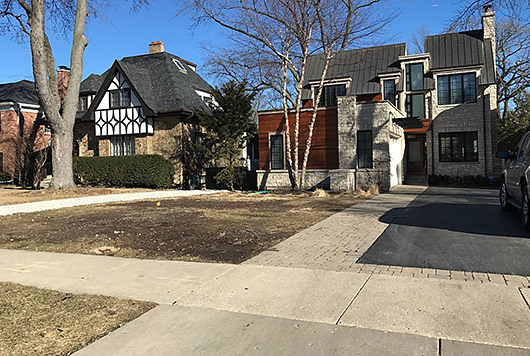 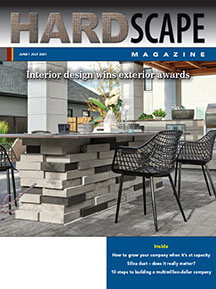