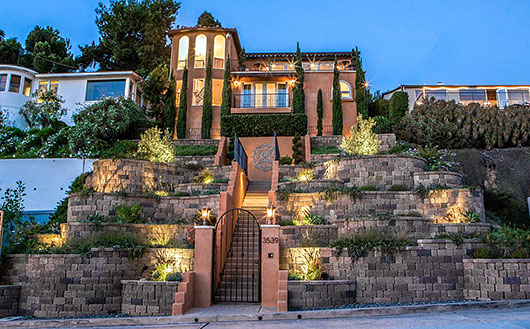 The retaining walls were built around the existing poured concrete staircase bordered by stucco walls. The client was a mechanical engineer very involved in designing the lighting and the walls. Creating the curves required lots of cutting. James says, “Each one of those wall caps had to be cut to form, and the face had to be chipped with a hammer to make it look like a factory edge.” Photo courtesy RCP Block & Brick.
A big beautiful wall
By Tom Hatlen

Year completed
2012
James Bond (not the secret agent) started his 39-year construction career doing mostly excavation and boulder walls. “I used to work a lot up in the Rancho Santa Fe area and they wanted natural rock walls with huge 7- to 10-ton rocks. Then when the Keystone walls came out I got into those.”

He says, “So many properties in California have a house on a hill where you step out the back door and there’s a little bit of yard and then a 2:1 slope, and nobody knows what to do with that 2:1 slope.”

This property was one of those. “When I got there they had sewer pipes stuck out of the ground. Aside from a 5’ wall at the bottom, the yard was just a total unimproved mess.”

In contrast, James says the neighbor’s property was gorgeous. Lifestyle magazines would come out and take photos of the neighbor’s topiaries. The client told James, “They never show our yard because it looks so bad. Do something for me to where they’ll want to photograph our yard too.”

Design challenges
James says the client hired him after seeing a wall he had built for their friends. Photos of both projects were later featured in a calendar published by Keystone Retaining Wall Systems. So the client got his wish.

This job was unique in that the client was a retired engineer and very involved in the wall design. While the client had worked in mechanical engineering, he had a wide range of engineering expertise. He and James kicked design ideas back and forth until they landed on the final plan.

To achieve the look they wanted with multiple wall segments in a variety of heights and curves was going to take extra time and lots of cutting. It was going to be expensive. “I explained to the homeowners upfront, ‘I can make it look like this but it’s going to cost more. It's up to you.’” 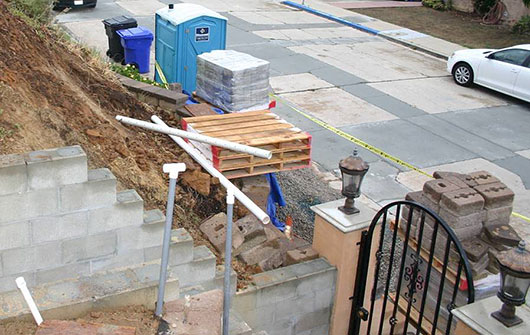 Materials had to be delivered piecemeal because the parking space in the street was the only available storage. The crew extended the existing CMU walls by the staircase to accommodate the elevations of the new retaining walls. A subcontractor later finished it out with stucco.
James had to design the retaining walls around the existing poured concrete stairs and CMU walls. James says the client didn’t want to replace the stairs because the structure was sound and the stairs were primarily for deliveries.

He says delivery trucks can’t access the private road that leads to the front entrance. “I barely was able to fit my F350 up in there because it’s just cut into the side of the hill.”

Overbuilt to last
The 30’ wall was built on the back side of the house. The entry to the backyard is a walkout basement. At the bottom of the wall, across the street, the neighbor's roof is almost at street level. That’s how steep the hill is.

In building a series of walls that tall on such a steep slope, James says he went beyond what the engineering required and overbuilt everything. He dug the footings deeper, made the drainage stone area huge, stepped up to 4” drainage pipe and upgraded the geogrid strength. Up to 3’ of block is buried for the taller walls. There’s a layer of geogrid every 2’.

“I spent a lot of years going around fixing walls for people. People try to cut corners and they have walls come down.” 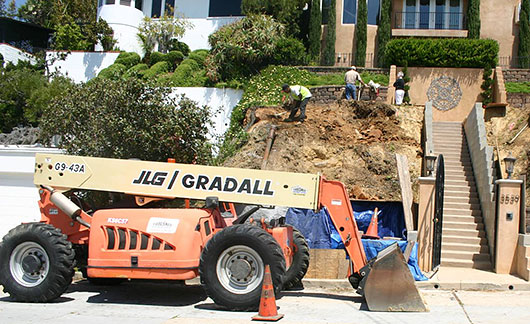 The 40’ reach Skytrak was the only earth moving piece of equipment used on the project. They used it with a loader bucket to excavate and switched out to forks to move block.
No room to work
With the sloped property ending into the street, James says all equipment and materials had to be stored on the street. The Skytrak they rented also had to operate from the street.

“There was no place else to put it. We made sure all of our block, piles of gravel, pipe, fabric, our equipment, everything, only took up the width of a parking space so we weren't impeding traffic. The street isn’t that wide so we had everything delineated and caution-taped. Then when we used equipment, obviously we had flaggers.”

With space so limited they had to schedule multiple deliveries of block and gravel. James says his supplier (RCP Block & Brick) “was Johnny on the spot delivering block each time we needed it. There are certain suppliers that I’ve worked with on all my jobs. So it was just a matter of picking up the phone for next day deliveries.”

“They would dump the gravel, etc, into the street and then we would take the machine and stockpile it so people could get by on the street. Everything had to be touched 2 or 3 times after it was delivered.”

The Skytrak had a 40’ reach nearly to the top of the hill. They used it with a loader bucket attached to excavate the hill. They switched it out to forks to move block to the work area where they installed it by hand.

The Skytrak and materials were left in the street overnight for the 2-1/2 months of the project with no problems. James says the municipality was fine with it so long as they kept everything in the parking area.

He says, “I think the biggest challenge in this project was trying to keep everybody safe, keeping the dirt sloped back to prevent cave-ins. It was also a challenge to control runoff so we didn't have silt running out onto the street when there was a downpour.”

With the project completed in 2012 James is now semi-retired. He says that wall is still structurally sound, looks good and drains well. “I think it was one of my best jobs.” 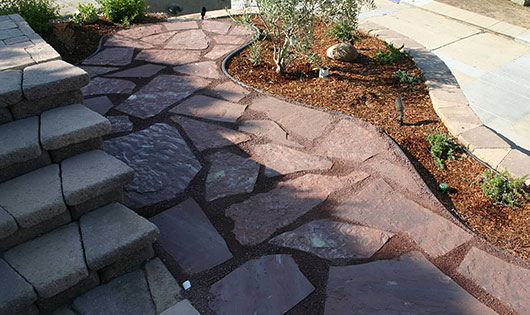 Flagstone patios built into the walls are permeable to help with drainage. This photo also shows the cut wall caps that allowed James to achieve the wall’s curves. 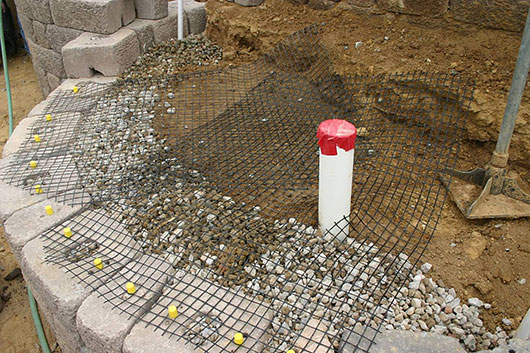 James says, “I've always taken pictures of geogrid layers and other important structural things, so if there's ever an issue I know exactly where to go back to.” 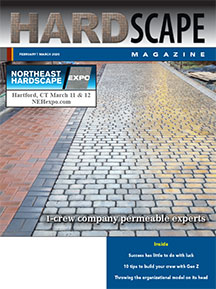