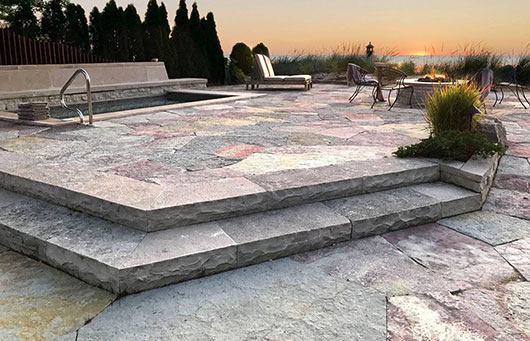 The client loves the colors in the Chilton Flagstone pavers from Eden-Valders Stone. Tim says some of the stones were 5’ or 6’ wide and 400+ lbs like the one at the bottom of the photo. "It took 3 guys to move one of those mighty stones and then slowly cut it to fit."
Stone weathers Lake Michigan storms
Award-winning “crazy quilted” natural stone paver project designed to take on high waves.
By Tom Hatlen

With Lake Michigan at near record high water levels, storms are producing waves as high as 20’ causing severe damage to the lake shores of Illinois, Indiana, Michigan and Wisconsin.

High end properties with stunning views line the Evanston, IL section of the lake. But improving those properties has been a high risk proposition. To protect one small part of the shore, a group of 4 neighbors joined together to help fund an Army Corps of Engineers project.

The project began with Army Corps of Engineer’s contractors dredging up tons of old concrete pieces that had served as revetment walls. Then they hauled in load after load of massive quartzite boulders to reinforce the shoreline and to build new revetment walls as far out as 100’ from the shoreline. The revetments are intended to mitigate the waves somewhat.

Designer Tim Benz’s client was the catalyst in bringing his neighbors together for the project. With the revetment work done, he initiated his plans to turn his lake front lawn into a backyard oasis. He brought in his long-time design/build contractor, Nature's Perspective Landscaping, along with architect Garry Shumaker of Shumaker Design. Tim headed up the project for Nature’s Perspective.

The project began with Army Corps of Engineers contractors building quartzite boulder revetments into the lake to mitigate the damaging waves. The project is designed so that high waves sheet over the lakefront stone and drain into the lawn. The section of patio away from the lake has wider, grassy joints that allow modest drainage from the watercraft.
Garry designed the hot tub/shower area and brought in subcontractors to build it. Tim was responsible for the design of the patios, the ramps, the curbs, the turf, the plantings, the lighting, and the drainage.

Tim says most of those major design elements had been worked out in the past. But, as the time to build approached, it changed. “Everything was originally supposed to be in different places, but due to property lines and zoning regulations, they all had to be maneuvered.

“As the footings for the Jacuzzi and shower were going in, we used a drone to take some aerial footage. Then I overlaid that over the Plat of Survey we had worked from. The Plat of Survey showed the client’s land mass 10’ or 12’ into the lake. Ultimately we decided we’d just redesign and reset our grades based on where they had placed the footings. So it was definitely a moving target of where everything was going to end up.” 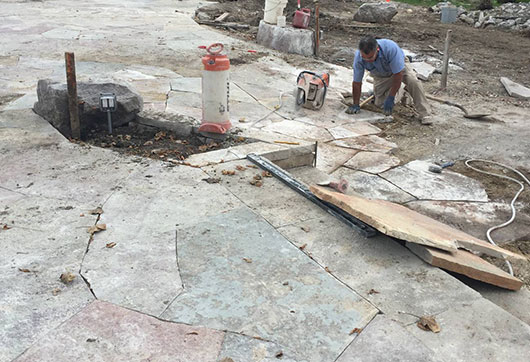 Lake construction damage
The Nature's Perspective crew began construction around July 4th, 2018 and finished by the end of September. First order of business was cleaning up the mess from the Army Corps of Engineers work. The client’s backyard had served as the major thoroughfare for heavily loaded trucks and construction equipment used in the lake restoration work.

“They caused a lot of damage to the property. They were literally driving semis full of those quartzite boulders over it. Before we started, the lawn was so compacted that it would not drain. It had small lakes in the backyard. We had to go in and do tons of excavation to restore the lawn and to build an extensive drainage structure.”

The entire turf area is constructed as a drainage field because despite the new revetments, the property is still hit with powerful waves. Tim says the property is designed so that incoming waves will sheet over the areas nearest the lake and drain thru the lawn. The drainage field is designed by code with 1’ of soil over 2’ pipes wrapped in stone and fabric, and sand beneath that.

Today, storm water infiltrates very well. Tim says, “So even with huge waves, the water is able to pass itself through the system within 1 day.”

Crazily quilted stone pavers
With the substructure completed, the crew began work on the natural stone pavement areas. The technique is called crazy quilting. The installation is sand-set with joints of about 1/4” so that walking bare foot would be comfortable. The joints were carefully treated with polymeric sand so that water would sheet over the surface. 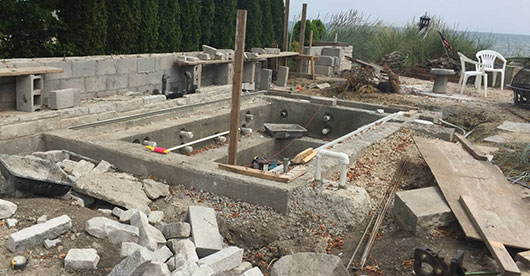 Other contractors built the hot tub area. As the footings for that area were going in, Tim used a drone to take aerial photos which he then overlaid over the Plat of Survey. They didn’t match up by several feet, so Tim redesigned everything to match up to the footings shown in the photos.
Tim says natural stone accounts for probably 30% of their paver work, and probably 25% of that is quilting. “It takes a lot of cutting. We have amazing crew members. These guys are artisans. They know exactly how to get those joints to fit perfectly. It's very laborsome.”

The only significant installation hiccup occurred when the hot tub contractor realized he didn't extend a drain pipe as far as it needed to be. “I think we had to take up 10’, maybe 15’ of pavers so he could finish that out."

Even with the new revetments, Tim says the property owners are still seeing new storm damage. “In the last year we’ve had 2 storms with waves pressing at 13’+ slamming into projects. This project held up amazingly well. The property to the north was done by a very reputable company, and 50% of their patio was blown up and literally thrown into the yard.”

Tim says they’ve taken what they’ve learned from this property and are applying it to a neighboring property they are restoring. “We will be taking it a little bit more aggressively with even tighter joints and an even a more secure base, things like that.”

Tim says the height of various elements was actually very exacting. “The client wanted to be able to see out over those dunes, without feeling exposed. So we added those dune grass plantings. The root system goes down something like 8’ locking the quartzite boulders together and preventing washout between boulders.” 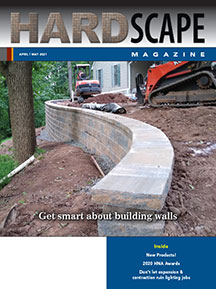