The non-permeable walk on the left slopes toward the permeable drive to carry water away from the house’s foundation.
1-crew company permeable experts
By Tom Hatlen

After nearly 20 years as a lawn maintenance company, Key Landscape gave it up. Zak Key says, “We gave up all of our accounts, sold all of our mowing equipment, and went full on hardscaping.”

That was in 2006. They had been moving in that direction since about 2000. Today, Steve Key (Zak’s father) estimates hardscape accounts for about 90% of their non-snow work. 75% of that is permeable paver driveways. Not what you might expect from a small company with a single 3-man crew.

Zak says, “When we got certified we promoted that in our radio ads and our Facebook page. Sometimes we'll do a boost for $10 or $15, advertising our Facebook page. We actually get quite a bit of people that visit the site. We pushed certification so much that 3 or 4 other contractors in town got ICPI certified. It’s for the benefit of everyone.”

They also advertise their 5-year warranty which reinforces to clients that they know what they’re doing. Steve says, “We don't have any callbacks to fix anything unless it’s for something like someone backed into a retaining wall.”

Key Landscape uses #57 clean stone base for all paver installations, permeable or not. All drives are reinforced by geogrid across the entire project.
Permeables took off
Steve says permeable pavers have really taken off the last few years as municipalities stepped up regulations limiting the amount of impermeable surface area that lake properties can have. Other impermeable surface regulations have been in place for some time, but people are just now discovering permeable pavers as a solution.

This has been especially true for permeable driveways. Zak says, “Probably 10 years ago nobody had even heard anything about permeable pavers. We just did a 4,000 sf project with 3 driveways for a new $2 million house up on Sunapee Harbor. They were only allowed to have a certain square footage of impermeable surface, and they used all that up when they built the house. So they couldn't use asphalt or concrete.”

“We get a lot of lake work up there through the Department of Environmental Services for New Hampshire that way.”

Applying permeable practices to all pavers
Having become comfortable with permeable pavers, they’ve adapted a permeable-style base to their non-permeable paver work. They use #57 3/4” angular clean stone (no fines) for the base, #8 or #9 clean stone for the bedding layer and polymeric sand in the joints. Steve says they don’t dig as deep in a non-permeable job since the base doesn’t need water storage space. They use a 6” base for pedestrian applications and an 8” to 12” base for vehicular applications depending on soils. (For a more detailed discussion on using a clean stone base, visit HardscapeMagazine.com/hybrid.php)

Steve says they began shifting to clean stone for steps and raised patios 9 years ago. They had problems with a staircase built of retaining wall blocks/caps on a geogrid reinforced crusher run base. That winter there were stretches of weather where it warmed up and rained.

“Then it froze,” recalls Zak. “It pushed everything up. You could put your middle finger between the caps. It had heaved up so much because of the fines holding water in the base. From that point on, we went to 3/4” clean stone and we haven't looked back.”

For flat work, they didn’t switch over to a clean stone base and bedding layer until just the last few years. Zak says clean stone requires minimal compaction. Without the fines that make crusher run soft, clean stone is self-compacted to 95% dumped right out of the truck. “It's so much easier on the guys because it takes a lot less compactive effort (to achieve 98% proctor density).”

Rain not a problem
With clean stone Zak says rain is mostly a minor distraction. “We don’t have to worry about a thunderstorm coming and whether our bedding layer got tarped. We love that we can walk in the bedding layer wet or dry.”

Steve adds, “With clean stone our guys can still work in the rain unless it's pouring out. In fact a few years ago it was a really wet summer and we had to finish a 5,000 sf driveway. We worked under E-Z Ups.”

“We put up three 12’ x 12’ E-Z Ups across the driveway with a big tarp over them. We called it tent city! But we got work done when other contractors weren't.” 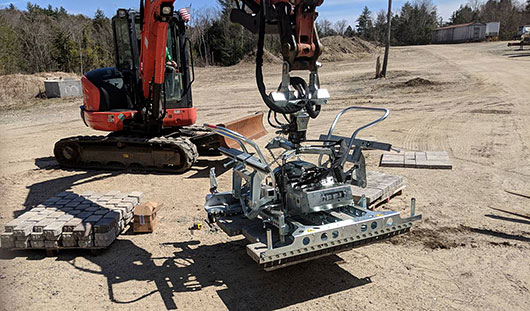 Zak says they purchased the Pave Tech Probst Paver Clamp because they’ve been doing lots of large driveways and they can’t find enough labor to do the work. “So, we've been investing more in technology. Plus, no one has to pick up blocks all day. You need 2 guys, 1 on the ground and 1 in the excavator, and they can lay 3,000 sf to 5,000 sf per day.”
1 fabric for everything
In addition to using the same base for non-permeable jobs, this year they also started using the same soil separation fabric, a non-woven 4.4 ounce fabric. The fabric has a larger Apparent Opening Size (AOS) that allows water to drain into the soil for permeable jobs.

For non-permeable work the fabric separates the soil and base just fine. It does cost a bit more than the woven fabric they used to use. But carrying just 1 fabric simplifies things, and they don’t have to worry about someone grabbing the wrong fabric.

“For a permeable job, if you use a woven fabric with small apparent openings, water will pool in the bottom of the base. Then you’ve got real problems. We get a lot of calls to fix jobs that failed because whoever installed it used the incorrect fabric or didn’t use soil separation fabric at all.”

Zak says learning about things like fabrics is the primary reason they took the extra effort to get their ICPI and NCMA installation certifications.

Steve says they’ve been using Permaloc AsphaltEdge that ties into geogrid set on the base layer. “It works awesome, and having that biaxial geogrid under the driveway allows it to hold up under the weight and lateral pressure of vehicles.” 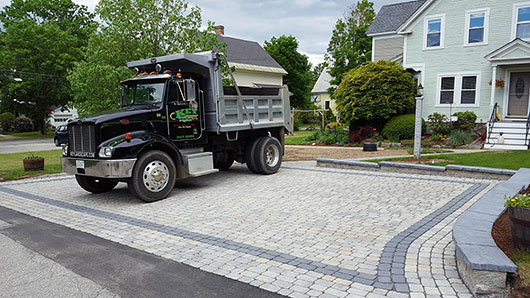 Zak says some clients are skeptical about how well pavers will hold up. “So, we parked our fully loaded Peterbilt dump truck on a permeable paver driveway, took pictures and put them all over our Facebook page.”
A better way to clean pavers
Most recently Zak says they’ve found a better way to clean pavers using a product called SOS-50 from EaCo Chem. They give every job a good cleaning 4 or 5 days after installing poly sand. “When a client spends all that money we want to make sure that it looks good when we leave.”

“We used to put down efflorescence cleaner with a sprayer and then 2 guys would come behind and scrub it with short bristle brushes. ‘We're going to kill our guys,’ I told my dad.”

Steve says the EaCo Chem system allows 1 person with a power washer to do a 12-hour job in 4 hours with no scrubbing. And they don’t need to go out and buy a surface cleaner machine.

An EaCo Chem nozzle attaches to the power washer nozzle and a hose connects it to a bucket of SOS-50 cleaner. “It draws the cleaner out of the bucket and mixes right at the end of the nozzle. We don't have to mix anything. If it's really dirty you can wait a few minutes and hit it again. Then you just rinse it off.”

Zak adds, “It's eco-friendly and it cleans like nothing we've used ever before, but it stinks like hell.”

They also seal most jobs. Steve says, “We couldn’t seal permeable pavers in the past because it would have sealed up the joints. Today, there are sealers made just for permeable. They enhance the color but also stabilize that #9 or #8 stone in the joint without clogging those joints.”

Using a far away supplier
Steve isn’t shy about looking long distance to get the service or the products they need. “We found a company that's an hour away down in Lunenburg, MA called Powell Stone & Gravel. If I called them late this afternoon, I would probably have that product here today or tomorrow morning.”

Zak says, “That Sunapee job was 2 hours away from Powell. But they brought us out 55 pallets of block on site by 7am that morning. So they had to leave by at least 5am.”

As Powell’s customer for 2 years with approximately $100,000 in block purchases annually, Key Landscape now gets preferred shipping and preferred pricing. Steve says, “They have been huge for us.”
Focused on hardscape
With all the hardscape work they can handle they don’t push for other types of business. They used to do a lot of irrigation installations for sports fields and other sites. They’ve only done a few in recent years.

Zak says, “We don’t go after them because our trailers are set up for hardscape. We’ve got our iQ saws, compaction equipment, all of our hand tools, all fabric, basically just a rolling workshop. We have to switch it all out to go back to irrigation. Then change it all back again. There's definitely more money in doing hardscapes.” 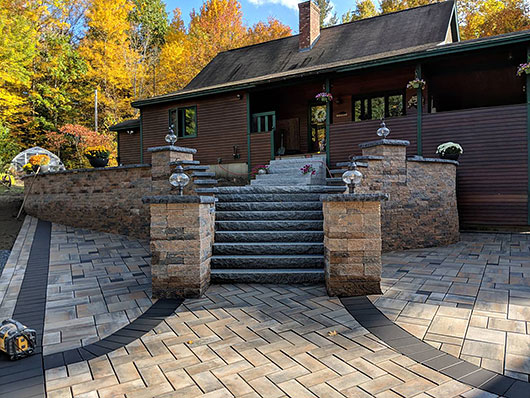 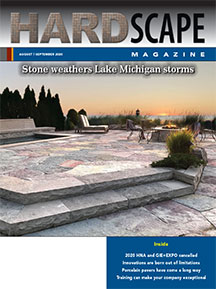